For the moment, let’s say you’re driving down a two-lane highway at night when, off to the side, your headlights pick up a misshapen bundle. You slow down to get a better look at whatever’s laying there, something that’s almost certainly dead, when, suddenly, part of the bundle shakes itself loose and skitters away into the dark…

Or it could be that there’s this cat that’s been hanging around and it’s pretty obvious that it’s had it more than a little rough. So, because you feel sorry for the poor wee thing, you’ve started leaving food out in a little dish by the back kitchen door. You hear it rustling around and turn on the light to give it a once over, see if there’s any improvement in its condition, only it’s not a cat, nothing like a cat, crunching down kibble. Nothing like a cat at all…

Or maybe it’s the night before garbage pick-up and you’re hauling the last bag out to the curb where you’ve already placed your recyclables and one half-full can. You reach for the lid, but it’s not in place. It’s lying, top-down, in the grass next to the can, and that’s odd because you’re more than kind of certain that you actually did put it in place before heading back to the house for that one last sack of trash. And that’s when you see it, furtive and menacing all at the same time, perched in the ripped-open Hefty bag at the bottom of the garbage can…

Whatever the scenario, what happens next is almost universal: you see those black eyes and all those sharp, glinting teeth in that gaping maw and your flight reflex kicks in. Before you’re even aware of turning, you’re burning rubber down the road, racing up the stairs, or dead-panic, brainless sprinting back to the house. And if your ears weren’t already full of the THUD, THUD, THUD of your own pounding heart, you know – I mean, you just know – that you’d hear it scrabbling along behind you, hissing and growling and keening for blood… 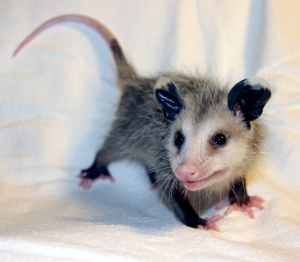 Except we’re not talking about some Jurassic Park raptor here, nor a great white shark or a freakshow hybrid of a government experiment gone awry, either. Nope. It’s an opossum – a Virginia opossum, to be precise – and it poses about as much threat to you as the neighbor’s Pomeranian. (You know, the one that they spritz with stink-pretty every other week after it’s been to the salon? The one that wears the pink Hello Kitty sweater as soon as the temperature drops below 40 degrees Fahrenheit? Yeah. That one.) So instead of chasing you down, that opossum’s busy either trying to put as much distance between the two of you as it possibly can, or making itself as small as possible, hoping against hope that you just won’t notice it.

Understand, I’m not saying that opossums can’t seem scary. They have more teeth than any other North American mammal and when their jaws are gaping wide in abject terror (yeah, mate, they’re positively terrified of you) it can be a little intimidating. But here’s the rub. Opossums aren’t predators. They’re scavengers, eaters of the dead and the overripe. See, they’re not interested in taking a bite out of you, unless, of course, you’re dead; in which case you have considerably bigger things to worry about than the chance that a wandering opossum just might stop in for a nibble. 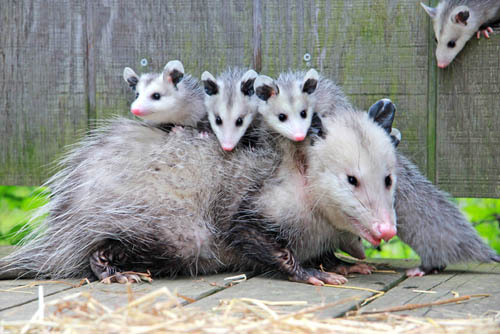 So, no, opossums aren’t predatory, but they are seriously cool. They’re nomadic marsupials, have opposable thumbs on their back feet and they have prehensile tails. They’re the most primitive mammal in North America and, when threatened, “play possum.” The word “play,” though, is more than a bit misleading. It’s not a conscious act, not something that they choose to do. Nope, it’s something that happens to them when they get overexcited. Their hard drives crash and there’s absolutely nothing playful about a crashed hard drive.

Keep all this in mind the next time you scare up an opossum, because “scare,” my friends, is truly a matter of perspective.

Give Us a Hand and We’ll Give You a Shirt

If you’ve been following us for any time at all, you’ll know that, while we focus on assisting domestic animals, we also work with the occasional wild, but native, animal, as well. Most are just passing through, either on their way back to the wild or off to a rehab center. Sometimes, however, as with the two American crows and the Canada goose that live here, this is where they’ll stay from here on out. These native animals aren’t eligible for release, either because they have some physical defect that will prevent them from a successful return, or because they’ve developed a certain affinity for their most significant predator, humans. Such is the case with an opossum that recently came to us from Nature’s Nursery Center for Wildlife Rehabilitation and Conservation Education.

They told us right up front that he seemed a bit on the friendly side, and he was. Even so, we treated him with the same distance as we treat all such animals we’re tasked with fostering. Several days ago, after nearly six weeks here at The Quarry Farm, we decided it was time to give him the opportunity to go it on his own. Sadly, rather than march off into the woods or even just into the tall grass near the banks of Cranberry Run, he decided to follow us back to the house.

After discussing the situation with the powers that be at Nature’s Nursery, it was decided that responsibility for him should be transferred to The Quarry Farm, where he will live out his days and serve as an ambassador of his kind to the folks who visit us here, on-site, and to those whom we visit in their classrooms.

But, Houston, we have a problem. We can’t seem to come up with a suitable name for him. We’ve labeled him a host of different monikers, but none of them have stuck. So we’re throwing it open and asking for help. The person who comes up with an appropriate name (and, yes, we’re the ones who decide what’s appropriate) will get a Quarry Farm T-shirt.

So, have at it, boys and girls, men and women.

And thanks. Here’s another quick study of the little guy, should that prove inspirational. 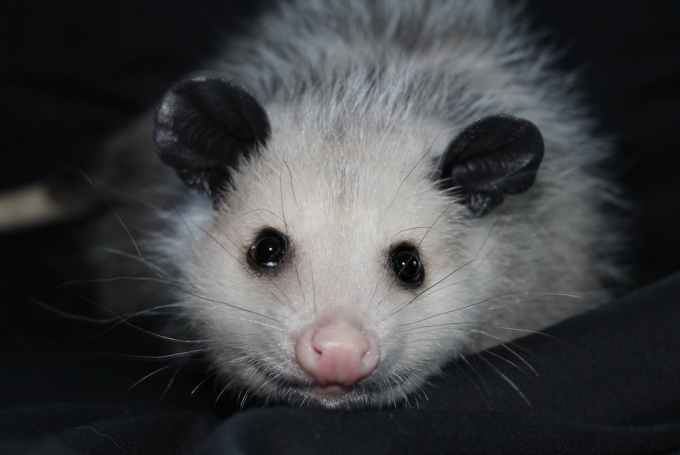 7 thoughts on “a different perspective”