For those of you who’ve been paying any kind of attention, the fact that I have a singular fascination for one particular type of bird should come as no surprise. Chickens. I’m talking about chickens. For those of you who thought, “crows”, fair enough, but no. While all corvids caught my heart long ago, they’re a different chapter in the work-in-progress that is The Quarry Farm.

So, chickens. And, more to the point, my fascination with them. And, to grind out an even finer point, how that fascination manifests. I’ve spent more than a fair amount of time wandering with the birds that share this piece of ground with us. I’ve fed them, held them, chatted with them, sung to them and simply sat and pondered the meaning of life with them. And they do, in my opinion. Ponder the meaning of life. I assume, anyway, that that’s what they’re doing when they grow still and quiet, their eyes unfocused and staring. They’re trying to make sense of the nonsensical, resolve order out of the chaos that surrounds them. Or so I choose to believe in more contemplative moments.

Chickens. They’ve proven fine companions, a wellspring of calm and the source of a flurry of creativity. They have, and here we get right down to the point, served collectively as a literary muse, even going so far as to inspire a unique style of poetry. It has Asian roots, but its own voice and a distinctive East meets Midwest vibe.

Chaiku, in its most basic form is nonsense, but nonsense with a direction. Take this piece, entitled surprise and the very first chaiku originating at The Quarry Farm:

There are, of course, other pieces that fit a more traditional mold. They range from the absurd 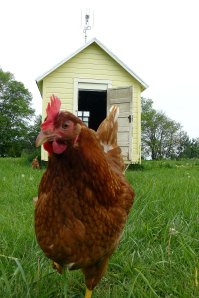 a matter of perspective
What is now a hen
was, times past, a dinosaur.
Respect your breakfast.

to the truly zen

Audrey, Too and Anne

Postscript This winter, eight new chickens, four roosters and four hens, joined the flock that calls The Quarry Farm home. They were part of a larger seizure of dogs, ponies, horses, pigs and fowl carried out by the Allen County Humane Society in the middle of what climatologists called the Polar Vortex and that I simply thought of as The Damned Cold Days. Suffice it to say that the conditions all of the animals were in were inadequate. The chickens came here skinny and dehydrated and while all bore signs of frostbite, some were missing toes and pieces of toes. One, a big white congenial rooster, didn’t survive the winter: a consequence, we believe, of both age and injury. So now there are seven: Wesley, who we suspect to be a bantam rooster cross; Audrey, Too, a red hen who has developed the habit of leaping to our shoulders or onto our arms; and two white roosters and three spotted white hens who have yet to reveal their names. At present, the individuals in the flock total 31, though with Easter on the horizon, that number is likely to rise.