About the time that we spent a year visiting local classrooms and introducing students to aquatic health canaries like dragonfly nymphs and hellgrammites, yet before the first goat, pig or donkey had trotted onto the farm animal sanctuary —we hadn’t even thought of attempting a farm animal sanctuary — we pipe-dreamed of what might happen here on The Quarry Farm.

There is no state or even county park system in Putnam County, nor is there a nature preserve. As family and friends have long enjoyed the woods, stream, oxbow the old quarry itself, we began to develop a trail system that is more identifiable to those of us who just know the way.

With teachers in that circle of relationships, we began to plan educational programs. Visual artists are also part of the mix, so we crafted some 2- and 3-D workshops.

Then Steve said wouldn’t it be something to invite musicians/nonmusicians from all over to come here and play/listen for a night? So in October of last year we sent a few emails around, made a few phone calls, put out chairs, chips and cider and waited for people to show. 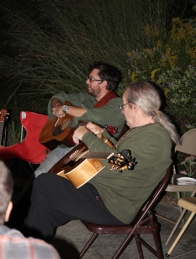 And they did. You may have read the post about Acoustic Night 2013. If not, it’s still in the archives. I will tell you that the photos are lovely, so lovely that we have gone annual with Acoustic Night.

On September 13, 2014, the skies were full of stars and cool temperatures kept the mosquitos away. Laura lit a fire in the Red Fox Cabin fireplace and kept hot coffee, tea and hot chocolate flowing. There were volunteer-baked cookies and muffins. I’m still not sure why she sent me to the store for Cheetos, saying, “Everyone likes Cheetos, even when they’re stale,” but I have to admit that I ate quite a few of the dusty fluorescent bits myself. I guess she was right.

And Steve was right about Acoustic Night. Musicians from 2013 returned, and others just kept coming. Erin Coburn (guitar and ukelele) and Mark Gallimore (guitar) were back. Bobbie Sue, Zoe (saxophone) Mike (trombone), another Mike (guitar) and Clara (violin) jammed from 6 to 10 p.m. A few other people came through carrying guitars but played off to the side.

There were kazoos for the first 25 arrivals and I heard a few of those. Little Caroline became quite proficient, as a matter of fact. She was a hit with the bronze turkeys next door at the sanctuary.

If you made it out this year, thank you. I hope the Cheeto dust came off your pant legs in the wash. If not, we’re thinking Labor Day weekend for Acoustic Night 2015. The Cheetos will be fresh.