There’s a man we admire who lives near the Forest of Dean. We are genuinely fond of him, though I don’t even know his name. I simply know him as The Tramp. He walks about the Forest, taking pictures of whatever catches his eye, turns his feet home and then cracks open his head and spills an absolute treasure trove of knowledge about the world around him into the ether (if you’ve not yet met him, haven’t found him through social media or some obscure search or simply missed him through sheer bad luck, here he is: https://atrampinthewoods.wordpress.com/). We do, however, know the name of his companion, his Sancho Panza. I think it’s probably safe to say that The Tramp would find his wanderings considerably less in so very many ways without her. Her name is Fizz and she’s every bit as curious about the world around her as any tramp.

But, why, you ask, are we bothering to discuss these someones that are half a world away? Well, first and foremost, The Tramp’s musings and observations are all of that and so much more. Read. Look. You’ll thank me for it. Thank me and The Tramp. And Fizz? Fizz is…well…Fizz. Second, it’s been said that imitation is the sincerest form of flattery and while I’m not above stealing an idea or three if I think it will help move everything along a bit more smoothly, I do draw the line at failing to give credit where credit is due. Having said that…

For those of you not near the here we’re at, it’s been cold; so cold that walks to retrieve the mail are arduous undertakings requiring planning, oversight and at least five layers of clothing. Today, however, (and likely tomorrow, if the forecasters read their scattered bones correctly, scried sincerely their battered leaves of tea), it’s been comparatively balmy; nearly 30° F. On Tuesday, though, we’re back into the basement, temperature-wise. So, given that we’ve been cooped up for the better part of a week, we threw open this window of opportunity and bounded back into the woods, Lolly, Anne and I. 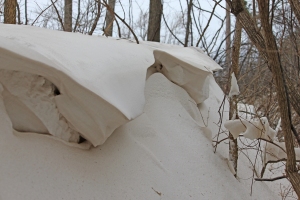 First observation of the day: snow is ever so much whiter under the crust. The winds that have battered this area have stripped the topsoil from all of the surrounding fields and tossed it until it couldn’t be tossed any further. Where it falls it lays in blankets, ribbons and bands of varying shades of brown. Sometimes you don’t even notice it until you’ve taken a step or two, all that dirt being evenly distributed so that there’s just no way of knowing. Other times, you just can’t help but see.

That same wind, though, did interesting things to what little snow has fallen, pushing what must have been little more than two inches of overall snow into two- and three-foot deep frozen waves caught in the process of cascading over the lip and down into the stream bed. Cranberry Run itself is frozen along most its sinuous length, with water breaking through the ice only along the most turbulent runs. 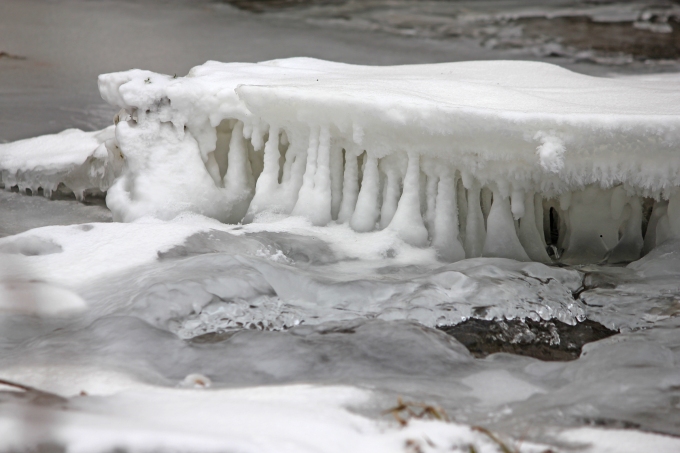 On the paths we’ve carved through the woods, down on the frozen stream and across the quarry itself were sign after sign after sign of the many and varied creatures that live here. Tracks of rabbit, squirrel and raccoon crisscrossed those of turkey and deer and a host of songbirds. There were even what we suspect were fox tracks and signs that at least one fox was successful at the hunt. Though we’ve not yet managed to photograph any of the foxes that we know live here (we know of two active dens), we hear them at night, interacting with one another in eerie, high-pitched yowls and sharp, barking yips and growls. We’re researching trail cams, at the moment to help us capture visuals and have acquired some sound equipment with which we hope to record the voices of The Quarry, once I’ve figured out how to effectively use it. 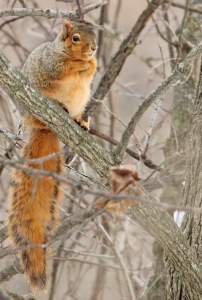 In a tree on the spit of land separating Cranberry Run from the old quarry, a fox squirrel sat on a branch and watched us walk on by. He was fat and sassy and at least one of the reasons for

his good health soon became apparent. Scattered here and there were the remnants of osage oranges, the seed fruit of osage trees. The osage tree (Maclura pomifera), also known as the hedge or hedge-apple tree, is one of the most commonly planted trees in the United States and is used as a field hedge, wind break and to stabilize soils. Unlike apples, pears or cherries, the squirrels tear the tree’s green and yellow fruit apart to get at the seeds, not the flesh. Remnants of their feasts are scattered in oval patches here and there along the stream and back in the woods.

Though there’s little doubt that many simply went unobserved, there seem to be fewer birds about than in past years. We did, however, see various sparrow species, juncos, cardinals, bluejays and several downy woodpeckers flitting from and between the trees.

Tomorrow, if the prognosticators are correct in their prognostications, we’ll probably take the time to do this again.

2 thoughts on “In the footsteps of Fizz”