Five wild turkeys ambled through our yard today, not two hundred feet from our home. We frequently hear them in the morning back on the quarry and occasionally see them in the evening, well behind our house, roosting in the cottonwood and walnut trees. They’ve never come this close before, though, and even though I know that they’re simply wandering to and from the soy bean fields across the road and so are likely to pass close by either here or Red Fox Cabin, it still caused me a bit of concern. I worried that they were becoming less wary, less concerned about our presence and, by association, the presence of other people, as well. I worried about the upcoming turkey season and how they’d prove easy targets if they were comfortable around us.

I worried, that is, until I tried to get a photo.

It was Anne who first spotted them and pointed them out to me. They were walking down a path along the tree line that separates the farm part of The Quarry Farm from the nature preserve side. I grabbed my camera and headed out to where Anne had last seen them. I moved to the far side of the tree line and worked my way up the path on the other side, then down the path on our side of the trees. Then up again. Then down. You’re looking at every photo I was able to get. You see them, right? The photographs, here between the lines of black and white text? Yeah, neither do I. That’s because I couldn’t get any. I can’t say that I didn’t see them. I did, at least in bits and pieces: the glide of a blue-gray head; a bronze-feathered body slipping through brush; a quick flash of red from a wattle. But that was all I got, quick glimpses. They ran me round and round an area about the size of an American football field, always on the other side of the field and always virtually concealed in thick scrub. So, no worries about their growing comfortable with humans. And no photos, either, not of turkeys anyway. But, since a picture paints a thousand words, here’s a shot from the winter before last. 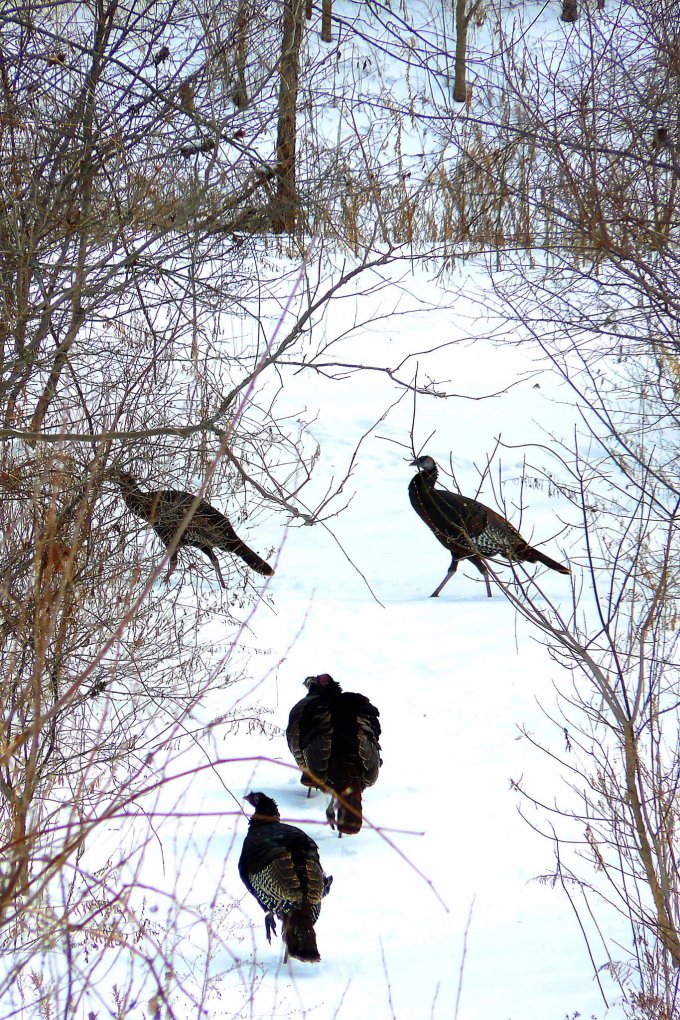 It is autumn, though, and there are plenty of other animals moving about. In the back field, a leopard frog boasted better than average camouflage. If it hadn’t jumped, I never would have seen it. In the woods, the last of summer’s dragonflies are torpid with the cold, allowing for some pretty extreme close-ups. Closer to home, in the crabapple tree some thirty feet from our front door, a wheel bug traveled leaf to leaf, hunting an increasingly rare meal.