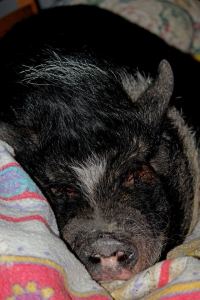 Gertie, shortly after arriving at The Quarry Farm.

In February of 2012, shortly after Anne and I came to the conclusion that we shouldn’t take on pot-bellied pigs at The Quarry Farm, we took on our first pot-bellied pig. Such is the way of things. “No, never,” has a way of morphing into, “Absolutely. Today? Bring her on over.”

She came to us by way of the Humane Society of Allen County. They, in their turn, came to have her by way of the Lima Police Department, who called the good people at HSoAC when they found Gertie and a number of other animals huddled around the body of the woman with whom they had lived for all of their lives. There was nothing nefarious about her death; she was simply an elderly woman whose passing left a host of animals bereft and homeless.

When she arrived here, Gertie was understandably morose. The only home she had ever known was gone, as were all of her companions, and she was in the company of strangers. We built her a shelter, her own pen, under the stairs that lead between the first and second floors of our home. We lined it with blankets and that is where she insisted on staying, pushing her head out of a cocoon of fabric just long enough to eat and drink. She slept 22 out of 24 hours, ranging out only when we forced her out, hauling her kicking and screaming from her sanctuary, out the front door and down a ramp we had constructed just for her, using a blanket as an improvised sling. While she was housebroken, this was no house she recognized. So, three times a day, this was our routine. Until, that is, the day she stood at the gate to her pen, waiting. She walked out on her own that day, out and through the front door and down the ramp, grumbling the whole way. Pigs are intelligent animals, intelligent and sensitive, and Gertie was a pig’s pig. It took her all of three days to work out her new situation, despite having had her world turned upside down. 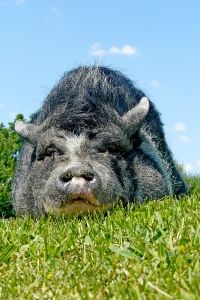 Gertie’s state of mind was only the first in a litany of issues that threatened her well-being. Though it was apparent that Gertie was loved in her first home, there were fundamental areas of care that had long been neglected. She was grossly overweight, weighing in at nearly 200 pounds when she first stepped through our door. And that was the least of her physical problems. Despite their infamous cloven hooves, pigs move about much like horses or donkeys or goats: that is to say, on their toes. Gertie’s toenails, her hooves, had never been trimmed, not once in the estimated seven years she’d been alive. Instead of walking on the tips of her toes, her hooves, extending out over a foot from each toe, forced her to move about on the pads of her feet. It took nearly two years to whittle her hooves back to the point where she could even approximate a normal posture. 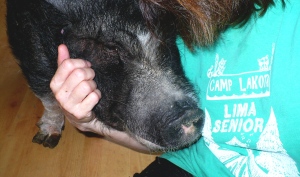 Anne and Gertie made friends fairly quickly, though even Anne had trouble at first; Gertie charged her the first time they met. She was much slower with the rest of us. It took her the better part of six months to accept me and even then usually only when I was in the kitchen, and it was nearly a full year before she came to accept her new place as home. I have no doubt that the introduction of Beatrice, better known as Little Pig, played a role in Gertie’s recovery. A new companion with whom she could see eye to eye finally gave us all the opportunity to meet the being with whom Anne was already familiar. 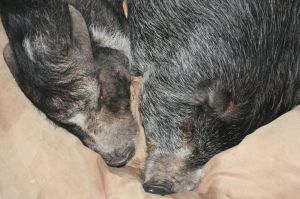 I’m stymied now. There are a million anecdotes that I want to share, but the details are gone. What I do remember is her expression. She went from guarded and flat to completely open, no matter her mood. Mostly, she was amused — at us, at what she had just done, at the antics of the other animals in the house — and it showed up in her eyes. Anne referred to them as whales’ eyes: expressive and deep. Though already thin, a few months ago Gertie started losing weight. Ulcers began to bloom on her sides and on the ridges of her spine. Dr. Kathleen Babbitt, Gertie’s doctor, diagnosed uterine cancer. On Tuesday, we took her in for one last visit, then brought her shell home and laid it in her favorite sunning spot.

I’m confident that the stories will come back, but even without them, I’m blessed. I’ll always have her expressions. 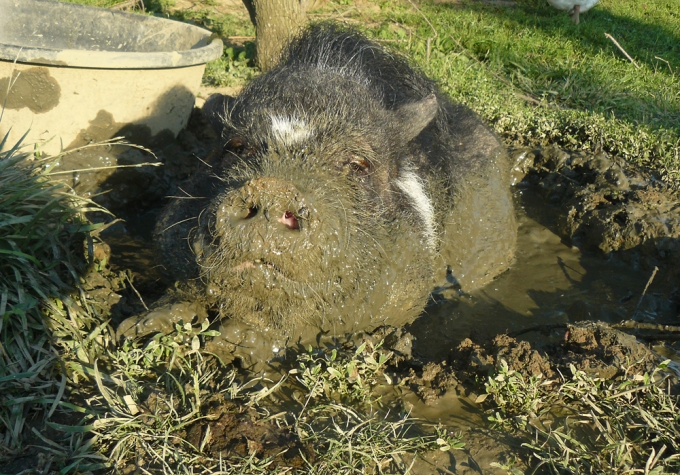 2 thoughts on “Thank you, Whale Eyes”