As children, most of us at one time or another have read, or have had read to us, fairy tales; the kind of story where the hero or heroine has to overcome great adversity in order to win out in the end. Generally, the moral of these stories is something along the lines of, “Be good. Be just. Work hard. Do these things and all will be well.” And just as most of us have heard or read these stories, we’ve experienced that life has a habit of teaching us a different kind of lesson, something a bit more realistic. I mean, life isn’t fair, right? Good guys regularly finish last and, all too often, what you earn from working hard is more hard work. That’s frequently been my experience, at any rate. So, I tend to think of myself as a pragmatist; I hope for the best, but expect something worse. There are those, however, who have described me as a cynic, and while it’s true that I don’t trust the motives of others, I consider that a survival trait, not a character flaw. So you’d probably guess that, from my perspective, there are no such things as fairy tale endings.

Greta, shortly after her rescue.

Last February, with the wind screaming and cutting and churning the air down to between 30 and 40 degrees below zero, members of both the Humane Society of Allen County and the Allen County Sheriff’s Office seized nearly 50 animals from a hoarding situation about 20 miles south of The Quarry Farm. And while this isn’t news to those of you who visit this site, the repercussions of the event, the sheer horror of the conditions those rescued were living in deserve telling and retelling.

The trench that Greta and Grits survived.

Shelter, for those animals that had any, were wide-slatted wooden crates open to the sky or with poorly fitted roofs, rough houses slapped together from bits and pieces of waste wood and 50-gallon plastic barrels laid on their sides. Where they had run out of proper fencing, barbed wire was looped on the ground to contain two horses and three ponies. Eight chickens survived, huddled under an abandoned car, ringed by the frozen carcasses of the chickens that weren’t so lucky. The frozen remains of two dogs were found, though only one is believed to have died of exposure; the other, it is suspected, simply starved.

Of the animals that survived, that were rescued, four were potbellied pigs.  Two, Bob Barker and Alphonse, came to live here, at The Quarry Farm. The other 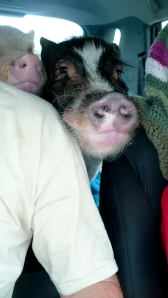 two, dubbed Greta and Grits, were spoken for by friends of ours down in Kentucky. This Sunday past, Anne and I picked up the two pigs from their temporary home at the HSoAC, loaded them into Anne’s Toyota Matrix and headed south. Because of the care they’d received and the socialization provided by the staff and volunteers at HSoAC, both pigs were extremely well-behaved, though understandably a bit restless. A whole grain bagel and pieces of both a cinnamon and an orange scone, picked up at a Panera in Troy, went a long way toward easing any nerves and both pigs lay down for the rest of the trip. Some twenty-odd miles over the Ohio border into Kentucky, and we’d arrived.

It was a long climb up a winding asphalt driveway to the top of one of the foothills of the Appalachian Mountains. At the top, along with an incredible view of the lowlands below and the Ohio River winding through the mountains, was Beth, standing between two low shelters: one labeled Greta and the other, Grits. Situated inside a newly constructed barn was a large, wood-slatted pen, but it was through the back door of the building that both pigs ran, into a

paddock that Bruce and Beth and Erin had finished fencing off just the night before. They immediately set to investigating their new digs, sampling grass, scratching themselves on posts and the wire of the fence and rooting into every depression they could find, but still making time for ear scratches and belly rubs enthusiastically administered by all three members of their new-found family.

And that’s where we left them, at the top of a hill in their forever home, surrounded by people who will not simply love them, but care and provide for them. From the horror of a trench in the snow to a hilltop house in the sky. Here is where they’ve come, where they’ll live.