Everyone has stuff to do. Some of us are list makers, like Quarry Farm Board President Laura. Others have swirls of snippets of chatter spinning through their brain, like yours truly. Or little notes jotted on the backs of envelopes stuffed in the glove compartment, drawers and/or stacked on the kitchen table (again, fingers pointing right back.)

Here on The Quarry Farm, there is always so much to do. Water tubs and buckets to clean and refill, food to prep and food bowls to juggle, hungry potbellies to restrain, hinnying donkeys to brush, and buildings to clean, rinse and repeat. This year, we have buildings to paint. And that’s just in the farm animal sanctuary. In the gardens of Red Fox Cabin, the long wait for nature to prevail over invasives is one which has yet to be won. But Nature is making headway, with a little help from her friends. After years of solarizing beds and hand-picking beetles rather than spraying and dusting, has allowed natural insect predators to get a foothold. The gigantic rainbarrel that collects droplets from the roof of Red Fox Cabin is almost always full for the watering. 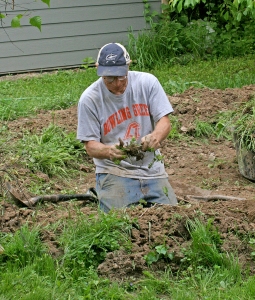 But those of us who currently ‘mind the store’ rarely have the opportunity to check everything off our wish list. Last Saturday — that golden day — we got to pen a whole host of checkmarks. About a month ago, I received an email from William Schumacher. I first met Bill when an Ohio Department of Natural Resources co-worker suggested that the man, an Ohio Environmental Protection Agency employee, might be willing to lend his expertise as a soil science presenter at a teacher workshop I was planning. It turns out that actually wasn’t the first time that I met Bill. He and his brothers Joe and Dan grew up along the opposite bank of Riley Creek. We rode the same school bus and developed the same love for nature while walking the creeks, pastures and woods.

Getting back to that email. Although Bill and his brothers no longer live nearby, they remember. They remember the fish that swam in Riley Creek and the pasture that their dad tended for years. And they’ve seen what happened to the creek when that floodplain pasture was plowed and subsequently eroded. They like the clear waters of Cranberry Run that flow through The Quarry Farm on their way to the Riley, so much so that Bill offered up his helping hand as well of those his wife Carol and their teenaged daughters and sons. Since his brother Joe was flying in from South Dakota and his brother Dan would also be up from the Dayton area, why, they could bring up their tools and pitch in to help us out, too.

Boy, did they ever. When Sophie the potbelly pig arrived here last month, she was so overweight that she couldn’t walk, much less be spayed. In less than eight hours, we had a new wooden fence in the quarantine area where Sophie is now dieting.

The butterfly gardens were weeded of quack grass, with straw down between the rows. Bill had dug and walled a kidney-shaped raingarden off the north gable of the cabin. Dan had led a crew along the south end of the Cranberry, clearing windfall from the path and cutting a big dent in bush honeysuckle along the way.

Words cannot sufficiently express our gratitude to the Schumachers. Instead, I’ll let the impressions of some of our youngest visitors say it for me. These drawings just arrived in the mail, sent to us by the third grade class from Pandora-Gilboa Elementary School following a day spent here on May 8. Those kids are one of the greatest reasons why we do what we do, so that these creeks, pastures and woods, as well as the nonhumans that share it, will mean as much to them as they did to much younger Bill, Joe, Dan and me. Still do. 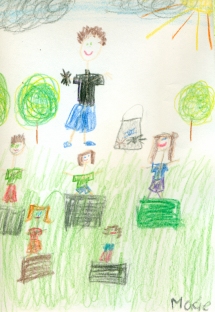