Beginning with an 11 a.m. appointment with a room full of children and a few adults at the main branch in Ottawa, we visited every Putnam County District Library location in the county. In this case, “we” is not a royal “we” but rather two humans, a middle-aged Virginia opossum and a bucket of freshwater macroinvertebrates.

Two weeks ago, we drove an hour east to Honey Creek, a Seneca County tributary to the Sandusky River. Our mission was to collect hellgramites, the impressive predatory aquatic larva of the terrestrial and flighted dobsonfly. By all rights, or if all was right with the world, we should have been able to find them in Cranberry Run as it passes through The Quarry. Underneath all the silt of the stream and Riley Creek into which it flows — even the bigger Blanchard at the end of the Riley — there is a river bottom of cobbles and boulders, prime habitat for hellgrammites. But there’s that silt, smothering everything.

Like I said, we drove to Honey Creek in between heavy rains and flood events and did net a few dobsonfly larva as well as two large dragonfly “babies”: a spidery skimmer and a froglike darner. Here at home, we collected leeches, snails, and half of a freshwater clam shell, its mother-of-pearl lining worn smooth. We set up an aquarium for their stay.

Each weekday morning, Captain John Smith was loaded into a carrier and as many macros as we could fish out of the aquarium were placed in a bucket for transport. No dragonflies made the bucket because, a few days after their arrival in Putnam County, the hellgrammites ate them.

It was a good week. We met new people, the Captain made a favorable impression for his kind, and I got to play with leeches. One young man suggested that leeches are kind of like shape-shifters. I like that. I’m going to remember that for our next gig. Two more suggested that the Captain’s tail looks like corn on the cob. Never though about that before, and they’re right.

Today is Saturday, and we are kind of tired. It seemed like a long week, what with two speaking engagements per day on top of day jobs, slogging buckets and straw through rain and mud here on the farm and in parking lots and nursing one of the potbellies through a mysterious spate of abscesses until his appointment next week at Ohio State University Veterinary Clinic. 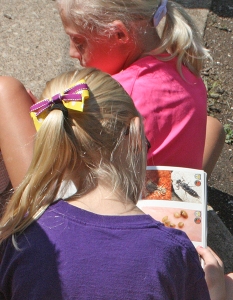 But I realized, after finishing Sy Montgomery’s The Good, Good Pig, that two speaking engagements per day for five days wasn’t nearly enough time to point out the importance of Virginia opossums and hellgrammites in our human lives. You need a lifetime of appreciation.

Nor is it enough time to admire the intricate, delicate patterns that trace the exoskeletons, especially across the backs of their heads. One glance in a bucket at the boneless athleticism of a swimming leech is just not enough, not enough for anyone.

We hope it was at least enough to leave everyone wanting to learn more. As Ms. Montgomery noted in her book, maybe a one-off was enough to lead some to a new way of thinking.