We’re six days and counting with no rain. The morass is drying and the butterflies and other pollinators have landed, flitted, and flown in greater numbers than we have seen in these parts yet this year. Before summer’s end, I may need all 10 fingers to count monarch butterflies. The milkweed keeps sending out its rich fragrance. We can hope.

In between butterfly counts, we loaded a crated Carlton into the car and took him down to the Veterinary Medical Center at Ohio State University. What started out as a solid mass that wrapped under his right foreleg had settled into three abscesses. Fearing a pernicious parasite, we made the trip that 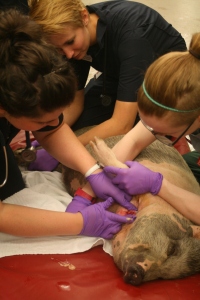 we’ve made twice now with Marsh the Nigerian dwarf goat.

I love that place — if not the reason for going, but for the experience. The veterinary students and faculty and are curious, kind and thorough. On Thursday, with a dozen or so students gathered around, Erin “won” the opportunity to lance the most problematic abscess. It was truly spectacular, so productive as to elicit a burst of, “Ah-ohhhhs!” and applause. Dr. MacKay announced, “I don’t trust anyone who doesn’t appreciate a good abscess.” That right there is a bumper sticker in the making.

On Friday, more color, of a very different kind, arrived here on The Quarry Farm. The Continental Junior Gardeners visited for the fourth year. There were many new faces this year, although some came into focus as we realized they were the siblings of children who visited in the past. They gathered leaves and arranged them on white t-shirts, then sprayed diluted acrylic paints on the shirts to create one-of-a-kind designs. Leader Charlene Finch said they will wear them in the Continental Fall Festival parade in September.

After lemonade and cookies, they walked through the butterfly gardens and visited the farm animal sanctuary. The turkeys claimed the group as their own and gentle giant goat Mr. Bill smiled for several cameras. Before they left us for another year, all but one camera-shy dad posed on the red Fox Cabin front porch for their annual portrait.

The sun continues to shine today. Damselflies and dragonflies are on the move, lessening the hum of mosquitoes bred in the recent floods. With paint left in the spray bottles, I think a few more t-shirts will be made this afternoon. Pick up a t-shirt of your own and come on by around 3 p.m.

Can’t promise there will be any cookies left, but there are butterflies and a much happier pig next door.