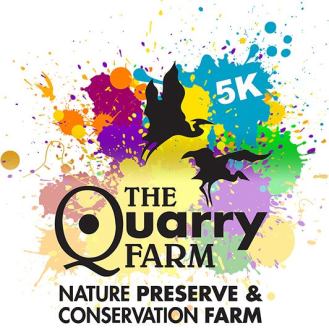 Registration is open! The Quarry Farm 5K 2018 race will consist of two events: The Virtual 5K and an Onsite 5K. The Virtual 5k is to be done at your own location and pace. The Onsite Quarry Farm 5K is an easy (just two sloping hills!) out-and-back rural course that takes participants past a historic bridge, two scenic creeks to a rest halfway and back to the finish line at Red Fox Cabin.

Participants of both events will receive a custom race t-shirt.

NEW FOR 2018: Onsite 5K participants will have the option of receiving a white t-shirt with The Quarry Farm logo on the chest. Runners/walkers wearing the white shirt will be ‘painted’ at various stations along the route. We will use liquid, non-toxic paints that will cool you down as you enjoy this colorful experience.

Registration is $25.00 and may be completed day of event or online at https://www.active.com/pandora-oh/running/distance-running-virtual-events/the-quarry-farm-5k-2018

All 5K proceeds further the goal and mission of The Quarry Farm Nature Preserve & Conservation Farm to provide the opportunity for people of all ages to increase their understanding of the natural environment of Northwest Ohio and to interact with their fellow inhabitants in a sustainable manner. 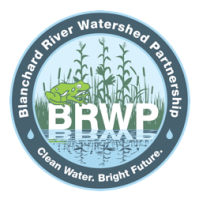 Thanks to Blanchard River Watershed Partnership for coordination support and to Ted’s Market for supplying water and snacks!

A chalk board rendering of the Lake Erie food chain, discovered in a lab at OSU’s Stone Lab

On approach to Stone Lab

During what I recalled at the time as a third trip to Stone Laboratory on Lake Erie’s Gibraltar Island (although I think a fourth stop snuck in there somewhere), I was struck by several things:

-Although Lake Erie is the shallowest of the Great Lakes, it is a force to be reckoned with when the wind is high and the waves are rolling (in fact, I believe it’s one of those rare occasions when it is appropriate to use the word ‘awesome’ as a descriptor).

-Lake Erie water snakes are gorgeous creatures, especially when tangled up in a ball on a sunny dock’

Water snakes in the sun on an old Gibraltar Island dock

-The bottom of your sleeping bag, with the top curled securely over your head, can pass as a safe place when you wake up in the middle of the night and realize you are on an island roughly the size of a football field without a boat and no way off until morning.

-Gulls perched on an outcrop at the bottom of a cliff overlooking Lake Erie at sunrise are ever so much more beautiful in real life than in a Pixar film.

HAB art: algal samples of all types were collaged and framed in one of the labs on shore at South Bass Island

I was there to learn more about harmful algal bloom and the current state of what humans know about the how and why of the overabundance of cyanobacteria. I came away with 10 lectures and a research vessel outing’s worth of that, as well as a greater determination to help develop a plan to control bush honeysuckle on The Quarry Farm.

Why do we want to control bush honeysuckle? Yes, birds and small mammals eat the berries, but these red edibles are wildlife junk food: cardinal potato chips. The goats of the farm animal sanctuary have helped get a handle on Russian and autumn olives, multiflora rose and even garlic mustard, but bush honeysuckle wreaks havoc on their digestive systems so we must keep it out of their reach.

And the spreading shrub is a monoculture of sorts, growing quickly and shading out all native species as it spreads like wildfire. The 2012 derecho felled some of the preserve’s tallest trees and the invasive jumped right in to fill the void. Without intervention to control bush honeysuckle, which humans introduced to North America in the first place, there will be little left to hold the soil in place and out of waterways, and there will be few nutritional foods for native wildlife.

We are writing a grant proposal for Great Lakes Restoration Initiative funds to get a major push underway. Thanks to support from Jim Hoorman of Ohio State University Extension, Dr. Ken Krieger of Heidelberg University’s National Center for Water Quality Research , Tim Brugeman of the Blanchard River Watershed Partnership, Dr. Jan Osborn of the Putnam County Educational Resource Center and Brad Brooks of Tawa Tree Service, we’ve got some major stamps of approval for a project that we believe can be implemented well beyond the tree lines here.