School’s back in session and we are ready for the cooler weather, especially with our annual Jam on September 8 and The Quarry Farm 5K just around the bend. Click on the cover here to read the Fall 2018 Newsletter and join us for the upcoming programs listed, including the new Give Thanks Woodland Hike, or give us a call/email to schedule an outing or program.

For those who aren’t already aware, we didn’t come by The Quarry Farm name through sheer chance. It wasn’t a challenge presented by an odd acquaintance – “Hey, you know the letter Q’s not used all that much…Think you can come up with a ‘Q’ name?”

The Quarry Farm is what the Seitz clan all called this particular branch of their dairy operation, this specific geographical spot. It was here that the family grazed cattle and Jersey calves, ponies Cookie and Babe, and cultivated hay. And, because they’re not all completely arbitrary in their actions, they had a compelling reason for calling The Quarry Farm “The Quarry Farm.”

In the late 19th and early 20th centuries, there was a string of quarrying operations throughout the area and along Riley Creek and Cranberry Run. Flagstone and limestone, plentiful in this part of the state, were the primary objectives. One such operation was located here and, though several small springs forced its closure, here it remains.

While at one time well known for sizable fish, the quarry underwent yet another change when, in the 1950s and again in the 1980s, local governments opted to dredge and straighten Cranberry Run in an effort to abate flooding in Putnam and Allen Counties. The spit of land separating the two bodies of water eroded to the point where the stream steadily deposited silt into the quarry until, nearly three-quarters of a century later, the quarry bears more resemblance to a wetland than to a pond or lake. 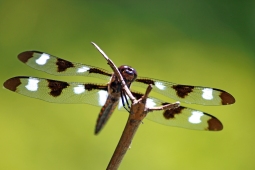 As such, it’s home to a host of animals. There are dragonflies and damselflies in abundance. Water fowl feed and nest here and there is a treasure trove of amphibians, including a thriving community of Blanchard’s cricket frogs. Recently, we’ve discovered salamanders in the area and, this past spring, spotted what we suspect was a river otter in the one area of the quarry that still retains some degree of depth, though it’s failed to make a more recent appearance.

Here it is then, the quarry from which The Quarry Farm earned its name. And, while photos are fine, such as they are, the experience is more satisfying first-hand. So give us a call. We’ll be happy to show you around.