On Tuesday afternoon, I walked up the drive to find the geese swimming in the backyard, delightedly dunking themselves in the water as they swam in wide circles. After sunset, Blanchard’s cricket frog and bullfrog calls bounced off the second floor windows. Fireflies flickered over the water, their reflections doubling their numbers.

It was beautiful. The trouble is, we don’t have a pond on the farm animal sanctuary.

What does flow through the Quarry Farm, through the nature preserve, is Cranberry Run, a fairly narrow tributary to Riley Creek which in turn empties into the Blanchard River. From June 12 to June 15, the local Weather Guy reported 3.34 inches of rain, much of it all at once. Beyond that, the National Weather Service has noted 2 more inches around these parts. In a nutshell, for about a day and a half, most of the Quarry Farm became one with the old stone quarry. 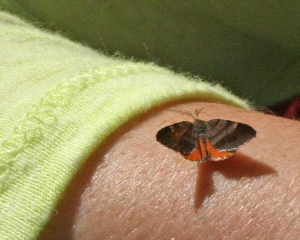 Overnight, the waters receded into the stream banks and the quarry itself. The geese splashed in the floodplain puddles. Donkeys, goats and potbellies were a whole lot happier than the day before with their full salad bar reopened.

The creek itself is brown with runoff from open fields to the south. Given a few days, the preserve trees and grasses will do their work and filter the creek to a clear flow again. Everything is green and lush above the water line, with various mosses growing on the water-soaked deadfall and logs from the the 2012 derecho, a fungi forest in the making. Seems like a good time to play catch-up and post part two of forage expert Tammy Spillis’ spring visit.

In addition to snake root, rue, wake robin, ginger and other wild flowerings of both the native and nonnative sort, the trail walkers who turned out on May 2 found several types of fungi on the Quarry Farm.

Thorny locusts line the path on the northeast rim of the quarry wetland. Their four-inch-long-and-counting barbs were used by women to hold their shawls together, said Spillis. What wasn’t their on Saturday were a shelf mushroom host-specific to the trees.

In the floodplain south of the quarry sits an oxbow of Cranberry Run. Or it once was part of the stream until it was cut-off in the 1950s in a mad dash to engineer every minor waterway in Northwest Ohio. Since that time, the “cut-off” and it the running creek have been working their way back to each other. Until the time that they do rejoin, the oxbow is a deep wetland that is home to fairy shrimp, a variety of amphibians, brooding wood ducks and fungi. 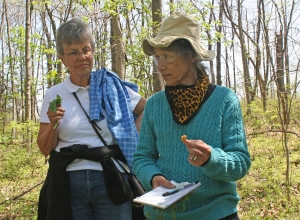 Then a cluster of pheasant back mushrooms, a beautiful edible, grew alongside mosses on a decaying log. It was marked with a feathery pattern of browns, exactly as its name implies. Another brilliant-skinned namesake, a leopard frog, hopped across the path as Tammy bent to take a sample.

Whether wild or storebought, Tammy told us that we derive the most benefit from mushrooms that are cooked. “The outside persists because of the protein keratin. All the nutrients, Vitamin B and 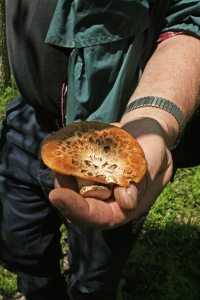 others are held within those cellular structures. So when you cook them, you release them. The only benefit you get from raw mushrooms is water and Vitamin C.”

Then there’s the risk that wild mushrooms, when eaten raw, can carry delightful little parasites onto the plate. Tammy said a little wild mustard or something in the horseradish family can dissolve the outside layer on the parasite, if you just have to have your fungus served raw.

She added that cooked mushrooms have tremendous power in fighting tumors. “Your body says, ‘A mushroom just went through me. This mushroom is normally hard, and it has this protein thing.’ And then your body starts attacking other things that are similar to that, stimulating an immune response. 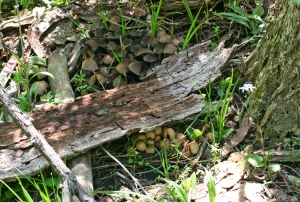 The last fungus we met was a bed of little gray-brown caps held by black stems. These “inkies” were used to make ink during Thomas Jefferson’s day.

On the return route we learned that, should we run out of water in late summer, plenty of thick, tangled wild grape vine ropes fresh water through the trees and across the paths. Tammy showed us how to wrap a plastic bag around a nicked vine so that it will fill with sweet, clear water.

“Always leave a grape vine in your woods in case your well goes dry,” was her advice. Sounds like a lovely sentiment to weave into a tapestry. I see a workshop in the future.