The article below (how appropriate, considering the subject, don’t you think?) appears in the latest issue of The Quarry Farm Newsletter. Download your copy by clicking on the cover to the right.

Not long ago after autumn rains had softened the baked lawn around Red Fox Cabin, little volcano-shaped mounds erupted here and there, heralding the arrival of moles. Moles don’t alarm me because their burrowing hasn’t seemed to cause lasting damage in the garden. However, convinced that the humans on a nature preserve should be knowledgeable about their fellow inhabitants, I went online to learn more about moles.

Members of the family Talpidae, moles are found in most parts of North America, Europe and Asia. Seven species live in the U.S., the Eastern Mole being common in our region. They are 5 to 7 inches long, larger than shrews and voles. Males are called boars; females are sows; and the young are pups. A group is a labor (perhaps because they are so industrious?). They are carnivores, not herbivores. Their diet is primarily earthworms, grubs, and the occasional mouse, but not our garden plants. Once they have eaten the food in one area, they move on.

Moles are amazingly adapted to a subterranean life. They can distinguish light from dark but not colors. Although their eyesight is dim, their hearing and sense of smell are so acute that they can detect prey through many inches of soil. They have large, powerful, outward-pointing front legs and claws for pushing dirt aside as they “swim” through soft, moist earth. They are able to disappear from rare ventures to the surface in 10 seconds flat, to tunnel 1 foot in 3 minutes and to run through established tunnels at about 80 feet per minute. Their short, velvety fur is non-directional, causing little resistance as they move rapidly through tunnels. (Their soft, dense pelts once supported a thriving moleskin industry.) Moles can survive in their low-oxygen environment underground because they can tolerate the high carbon dioxide levels in the exhaled air they reuse. Their saliva paralyzes prey, which they store, still alive, in underground “larders” for future consumption. Moles can detect, capture, and eat their prey faster than the human eye can follow.

Moles make 2 types of tunnels: feeding runways close to the surface where the molehills pop up and permanent tunnels about a foot or more underground, leading to a nest about 2 feet deep. What might look like the work of many moles can be the product of one busy tunneler.

Moles are solitary and highly territorial, coming together only to mate. Breeding season runs from February to May. From 2 to 5 pups are born after a 1-month gestation, and leave the nest 30 to 45 days later in search of their own territories. Although tunnels may overlap, moles avoid each other and will attack and even fight to the death when they meet.

Many online gardening experts write about moles in terms of their being destructive pests that must be eradicated. They suggest many methods of doing so: poisons; traps that choke, spear, slice or confine for removal; buried repellants like broken glass, razor blades, or thorny branches; or natural, more humane repellants like plantings that smell bad to moles (daffodils, alliums, marigolds, castor beans, etc.), castor oil drenches; and reducing lawn watering that could force moles close to the surface.

However, I lean toward a smaller set of gardening experts represented online who believe that moles are more beneficial than destructive. Rather than taking offense at molehills, they point out that moles improve soil by loosening, aerating and fertilizing, and the cones subside quickly. Any soil that has been lifted off roots can be pressed down again with a foot. Moles receive the blame for plant damage caused by chipmunks, mice and voles, and generally receive little credit for destroying lawn grubs. I myself would rather let moles eat pesky soil-dwelling larvae than chase moles out by spreading harmful poisons to kill the grubs. In the view of one expert, Roger Mercer, “Moles aren’t all bad. In fact they’re 99% good.” As a 15th century saying goes: “Do not make a mountain out of a mole hill.”

—The Gardener at The Quarry Farm

It took seventy-four minutes to dig a hole this morning; just over an hour, with shovel and pick, to create a nothing four feet by three feet by four feet deep. I had thought it would take longer, prove harder, given the heat and the dry. But, no. Just seventy-four minutes. Time enough to come to terms with the harsh reality of the past thirty-six hours.

In early July of 2010, Marshmallow and S’more, two Nigerian dwarf goats, wethers both and brothers by all accounts (though the two couldn’t be any more different), were delivered to The Quarry Farm by Anne and Rowan, who brought them north from Cincinnati in Anne’s little Scion xA. Their arrival fortified a growing vision of The Quarry Farm as a safe haven, a home and sanctuary for the unwanted and the unloved, the abused and the forgotten.

Which is not to say that all of the animals now living here were unwanted or abused. Buddy and Lucy and Bill and Beatrice all came from loving families who, through circumstances undesired, were simply unable to keep them any longer or believed them better served on The Quarry Farm. And so, too, it was with the brothers (if not by blood, then certainly in spirit). The family that raised them to that point loved them, and dearly. Sadly, the two large dogs that also lived with the family loved them as well, though in an entirely different and specifically threatening way. Thus the trip north.

Marsh and S’more (The Boys as we came to affectionately call them), when they arrived, joined the Priscillas, sixteen Hubbard Golden Comet hens, and Johnny and Stella, two non-releasable Canada geese; the sum and total of The Quarry Farm’s inhabitants (not including the three dogs and eleven cats). S’more, was, and still is, slim and athletic, given to spontaneous bursts of energy that found him bounding sideways and pronging through the yard. It was clear from the beginning, though, that Marsh had issues. While he’d chase after his brother, bash heads and sport about to the best of his ability, he was prone to a constant mild bloating that, despite our best efforts, made it difficult to keep up. On more than one occasion, a visitor would ask if “she” was pregnant. What he lacked in athleticism, though, he more than made up in personality. Frequently the first to greet guests, Marsh was sweet and gentle, curious and approachable and children thronged to him. He’d greet them, and us, with his head tilted up, encouraging any and everyone to stand nose-to-nose with him.

But while willing and even desirous of the attentions of others, particularly when they offered bits of fruit or carrots or peanuts, Marsh was clearly bound to S’More.

Inseparable from the first, the brothers would play together, eat together sleep together and wander the property together, often pressed up hard against one another, shoulder to shoulder, moving about in a coordinated tandem. Now, I ache for the one without the other.

A little less than three years ago, we found Marsh standing in the yard, straining to urinate, but unable to do so. We called Dr. Ron Baldridge, a local veterinarian, who, over the phone, diagnosed bladder stones. Unlike kidney stones in humans, bladder stones in goats, due to their unique and convoluted physiology, will, untreated, prove fatal. Explaining that goats were outside his purview, Ron recommended contacting Ohio State University’s Veterinary Hospital. There, they surgically removed the stones and, after a week, Marsh returned home. Here, we worked to acidify his diet, providing ammonium chloride in periodic drenches and pouring gallons of apple cider vinegar into water troughs. Even so, ten months later, they reoccurred, necessitating another trip to Columbus and a second surgery. And again eight months later.

Wednesday evening, we found him once more, his belly distended. On Thursday, we drove him to the OSU veterinary facility in Marysville. That evening they called with disastrous news. Early Friday, I brought what was left of him home.

It took seventy-four minutes to dig a hole this morning, and even less time to fill it in. But there are holes and there are holes, absences that no amount of effort can ever fill.

So, then, because there is nothing else to do or say, goodbye, Marshmallow. Goodnight and sweet dreams.

People never cease to amaze. As a species, well, let’s just say that I often prefer to spend my time in the company of others (chickens being the perennial favorite). As individuals, though, there are so many who shine. I met three such last Wednesday: Becki and Mustaq Ahmed and their granddaughter, Kennedy.

Not this weekend immediately past, but the weekend before, Anne and I set up at the Bluffton Farmers’ Market on behalf of The Quarry Farm. We really didn’t have anything much to sell – a basket of tomatoes, a dozen glass jars of jelly, some notecards – but farmers’ markets are great places to get the message out, to do a little self-promotion. And with the second annual Acoustic Night coming up (Saturday, September 13, from 6 pm to whenever), it seemed like a good time to make a personal appearance, be a bit more high profile. Becki and Kennedy were wandering through the market when they saw our table and picked up a copy of the latest newsletter.

On Tuesday, Becki called and asked if we’d like some of her “small and knotty” apples. She’d seen that we ask for apples in our wish list and hoped that hers would prove acceptable. From my experience, I assured her, goats and pigs and donkeys and chickens and ducks and geese and turkeys aren’t the most discriminating of gourmands; so, yes, please, apples.

She and her family came out the next afternoon with two large containers full of fruit. We off-loaded the apples, enough to fill a large, red wheelbarrow typically used to transport hay and straw. It was an excessively humid day, as many have been of late; while there was precipitation, it was more of a sky-dripping, really, than rain. The wet had most everybody under cover: the pygmy and Nigerian goats under the pines, the turkeys and chickens at the base of the crab tree and under what remains of the forsythia, the pigs in their various shelters. The ducks and geese were gamboling about, too overjoyed with the quality of the day to bother with anything as mundane as visitors.

While we waited for the sanctuary residents to recognize their windfall, Kennedy, with Becki in tow, set out to deliver the good news and meet some of those about to benefit from their gift. Mustaq tagged along behind, photographing and filming their interactions. 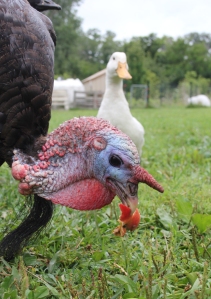 Mister Bill, a recently arrived Boer goat, was the first to discover the largesse. He set to with a will, scattering bits of apple and not-so-bits of apple in a wide arc before him. The geese and the ducks discovered the bits, which alerted the chickens and the turkeys, and they tucked in. The pygmy goats followed the Ahmeds and Kennedy to the feast, where they stood on their hind legs, front feet braced on the edge of the barrow, and bobbed for apples. The three pot-bellied pigs rolled up next (three hours later, you could have almost literally rolled them away). Finally, the two Nigerian dwarf goats and the miniature donkey caught wind of the event and made their way over. It wasn’t long before the wheelbarrow was on its side, the apples spilled across the ground, allowing everybody easy access and laying waste to the old expression, “Don’t upset the apple cart.” All in all, a most wonderful day. 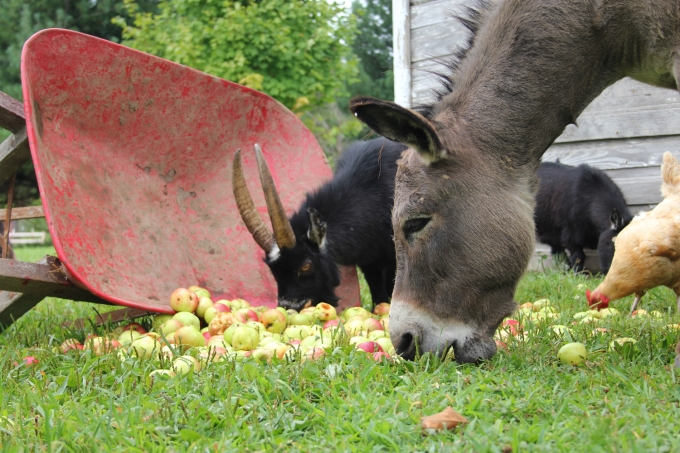 Thank you for that, Becki and Mustaq and Kennedy. From the bottom of our hearts, thank you.