It’s been summer for a little over a week now. On the quarry, and elsewhere in the region, I suppose, that means raspberries. Here they’re mostly wild and black, though there are a few domestic red raspberry brambles planted in the big back field nearly two decades ago. Now the picking of raspberries, dependent on where it is that they’re being picked, can involve some little bit of a blood-letting. Here, along the wildest areas of The Quarry Farm, that is certainly the case. 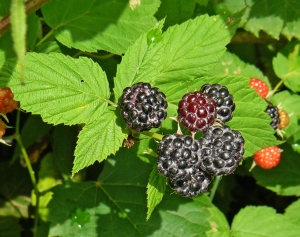 There are the brambles, of course, with their little thorns that snag cloth and skin. And then there are also the multiflora rose bushes, the thorns of which are a bit more than little and, consequently, do a bit more damage. Hawthorne and honey locust trees have thorns that, for the unwary, can prove literally life-threatening: honey locust thorns can grow to as long as five or six inches, come in clusters of ten or twelve at a time and are as sharp as needles. But botany is only one aspect of the blood bath. Mosquitos range in clouds of hundreds, along with midges, horseflies, deerflies and a host of other little biting beasts. 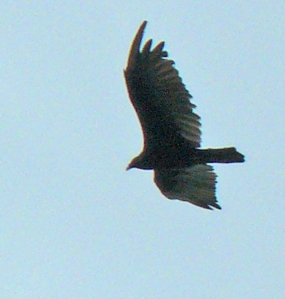 But the berries themselves make the challenges worthwile, not to mention the sights that come along with the raspberries. Things like dragonflies and damselflies seesawing back and forth as they chase their meals, those same pesky insects that are intent on syphoning blood; little black toads that scurry from spot to spot; robberflies pursuing the same kinds of prey as the dragons and damsels, but in a much more “point A to point B” kind of way; turkey vultures soaring across skies of blue and grey, catching thermals and various drafts that send them scooting to the horizon; and ropes of grapevine and poison ivy.

The berries, though, are the goal, and this year’s crop is bountiful. Speaking of which, the telephone just rang and it seems there’s a pie cooling on a counter not too terribly far from here.

If you’re lucky, we’ll save you a piece.