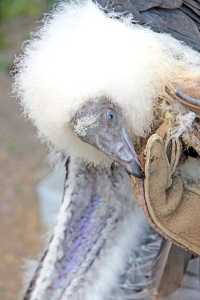 This past weekend, we were offered the opportunity to do something a little bit different. As part of our function at The Quarry Farm, we often serve as transporters for several area wildlife rehabilitation centers. Laura Zitzelberger, director of operations at Nature’s Nursery Center for Wildlife Rehabilitation and Conservation Education, contacted us and asked if we’d serve as courier and chaperone for two pre-fledgling turkey vultures. The barn the two birds were nesting in was destroyed by the storm that tore this area apart in late June. Since then, the birds had been under the care of Diane Myers at Black Swamp Raptor Rehab. Nature’s Nursery had taken in a nestling turkey vulture and were excited at the chance to properly socialize their charge by introducing it to the two birds from Black Swamp.

Despite some rather unsavory habits, turkey vultures are social, intelligent animals (http://www.allaboutbirds.org/guide/turkey_vulture/id).

Sadly, these positive attributes create a challenge for rehabilitators. Imprinting becomes an even more serious concern as their social nature makes them more prone to identifying with their caregivers. This can prove disastrous for any animal and can even prevent their successful release back into the wild. In an effort to offset their natural inclination to bond with their caregivers, the three birds were brought together in the hope that they would bond with each other. Although they can’t be housed together because of a significant difference in age and size, the three birds will be kept adjacent to each other and share a common wall; two on one side, one on the other. It’s hoped that all three birds will benefit from this situation, improving their chances for a successful release.

And speaking of releases, not only did we transport two raptors up, but we also brought one back with us.

Early last autumn, we were called on to pick up a red-tailed hawk in nearby Miller City, Ohio. The bird had been on the ground for a couple of days and the homeowner in whose yard the hawk was sitting had called Nature’s Nursery. We’re not entirely sure what was wrong with the bird, but it was in sorry shape when we arrived. Emaciated and dehydrated, the hawk had no energy to defend itself and we simply walked up to it, wrapped it in a blanket, put it in a carrier and transported it north. After months of exceptional care, the bird’s appearance and attitude had changed drastically and the rehabbers at Nature’s Nursery asked if we’d return her to the county of her birth.

The hawk was slow to realize its situation and initially only flew far enough to perch in the nearest tree. But after a bit and the pestering of several camera-wielding humans, it finally took to wing and flew away and out of sight. I won’t say it was a picture-perfect release, but it certainly was a success.

We hope for the same results for the turkey vultures. When it happens, you’ll be the first to know.