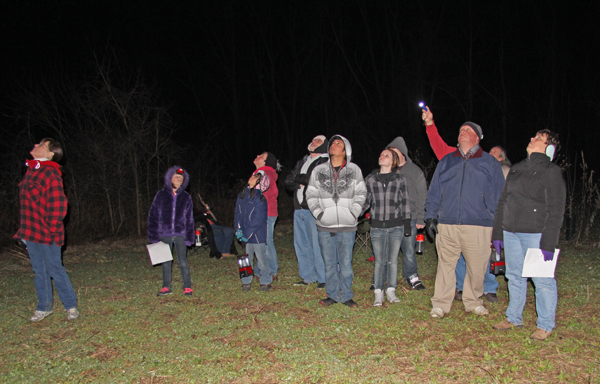 Astronomers have posited that if you were to count each and every grain of sand on all of the world’s beaches, you still wouldn’t come close to the number of stars in the sky. As a matter of fact, it’s suggested that you’d have to multiply that number by ten before you’d even come close. So it should come as no surprise, then, that the human imagination has configured the stars into any number of shapes over the thousands of years that we’ve been staring skyward. This past Saturday night, a group of participants in The Quarry Farm’s first Star Walk had the opportunity to view a few of these constellations.

It was nearly a perfect night for such an event. Although cloud cover had made star-gazing next to impossible for most of the week, a cold front moved in late Saturday afternoon and swept the sky clear. And while still chilly, the woods that surround the big back field provided a windbreak and pulled the teeth of the worst of the cold. While the wind howled outside the preserve, some stargazers even removed an outer layer.

Mike Erchenbrecher looks to the stars

Mike Erchenbrecher, an award-winning retired Franklin County science teacher and avid amateur astronomist, escorted more than a dozen people through the woods and back to the big eleven-acre field where we all turned our faces up. Mike immediately pointed out the Hunter’s two dogs, Canis Major, the big dog, and Procyon, the little dog, and then the Hunter himself, Orion, with his belt of three stars. His finger traced a giant W as he talked about Cassiopeia, the Queen, who is forever chased by Cepheus, the King. And then, of course, there were the zodiacal constellations. At this time of year, the most readily recognizable of such is Gemini, with its two bright stars, Castor and Pollux. Taurus is also recognizable, as well as Cancer.

Some closeups of what we saw:

Mike handed out star charts and independent-study over hot chocolate and cookies. Here are satellite passes for the next few days:

Iridium Flares
OK, so what’s an iridium flare? Iridium flares are relatively new ultra bright objects in the sky, produced by the glancing reflection of the sun’s rays off a particular type of satellite–the Iridium satellite. Because the main mission antenna are pointing towards Earth, at predictable points in their orbit, they pickup the sun’s glare and direct it towards the Earth, producing the “flash”. Because they flash so quickly, here are the dates and times to look fast:

To find out where the International Space Station is in relation to you, enroll at http://spotthestation.nasa.gov/ to get alerts for your specific area

Find yourself looking at the night sky with your cell phone in hand? Use to “GoogleSky” to help you navigate the view.