Four beautiful bronze turkeys were part of the flock here on the farm. Fezzik, Inigo Montoya, and Humperdink are now part of everything, having lived out their lives on the ridge above Cranberry Run. All three rode down I-75, from various points in Lucas County by way of Nature’s Nursery, in a hatchback.

The fourth, Miracle Max, arrived in similar fashion, and he still walks the grounds. Two weeks ago, Max was greeter as schoolchildren and scouts entered the south gate. Since Humperdink died earlier this spring, Max has been blue. Quite literally, as his skin was a pale blue: the blue of loneliness and the fear and discomfort associated with losing his band of tom-turkeys.

(About that: Turkeys’ heads change color to express their emotions. The blood vessels lying directly under the skin of the wattle (that strange unicorn appendage between their eyes) are surrounded by long bands of collagen. When the turkey gets upset, the blood vessels contract, exposing more of the collagen bands. University of California, Berkeley scientists have actually developed a synthetic toxin sensor based on the turkey’s color-changing technique.)

When the April visitors walked onto his acreage, Max flushed a deep red, puffed his feathers, and thrummed the balloon of his chest. Instead of two-stepping away from anyone who came within arm’s length, as is his habit, he allowed a few of the kids to touch him briefly. And when his guests closed the gate behind them at the west gate, Max glided beside them from the other side of the fence, becoming paler as the kids moved further away. One little scout insisted on going back to console him.

On Saturday, three lovely ladies took up residence here. A family in Michigan raised three Brown Orlopp hens with the intention of serving them on a platter. “But the girls loved them,” the dad said. Indeed, his three young daughters helped load them in our carrier. The eldest skipped and told us about naming them all ‘Waddles.’ Her younger sisters weren’t quite sure of our intentions, I think, judging by their tears as we drove away toward the Ohio line.

So this one is for you three girls to the north, for entrusting the Three Waddles to us further south. It’s also for a very happy, very rosy, Max. 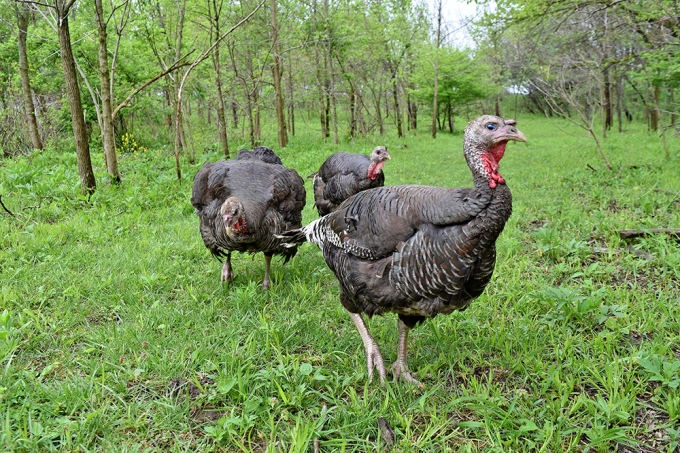 2 thoughts on “Changing of the color guard”