Over 100 years ago, there was no quarry here on these 50 acres. Cranberry Run was a meandering trickle. When the digs and blasts began, this place’s namesake was one of several in these parts. Over time, most closed or consolidated operation. Springs kept the abandoned holes filled. People and animals fished them. Picnics were eaten on the shores.

Before his body failed him, my dad spent a lot of sticky hot summer time rebuilding a stone wall between our quarry and Cranberry Run. This happened nearly 50 years after human hands and earth movers stretched, straightened, and deepened the natural engineering of the stream to push water through various townships to others downstream. The quarry was opened to heavy sediment loads forced through via the Run. Over the course of 50 years, the quarry depth went from 20 feet at its deepest point to no more than four of water and muck.

As soil, grasses, and trees further rooted the wall, the quarry began to change again. Aquatic plants, their seeds held for generations in the floodplain, took root beneath the water’s surface. Some are rare, others not so much, but most are native and blooming to attract pollinators and migrating birds to shelter among the green. 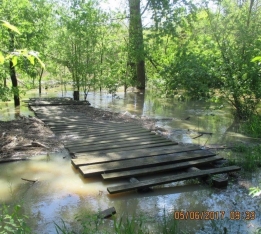 Two weeks ago, heavy rain flooded the quarry. Kayakers paddled through the preserve, weaving through trees well above the Run’s banks. The footbridge floated, held fast by heavy chains, thanks to Engineer Dave Seitz’ design. After the flood wave crested and rolled north toward the Blanchard, I kayaked under it and on to Riley Creek, past the 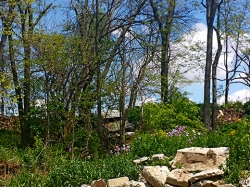 absent M-6 bridge, Putnam Aggregates and the Riley Creek United Methodist Church. The banks were surprisingly clear of debris, with one exception on the east bank in Riley Township. There, an old car follows a wave of cans and other discards toward a detonated washing machine on the bank below.

About a month ago, the water in the quarry was crystal-clear. You could lean out over the bank and watch spring life move in and out of the sprouting aquatic plants, except for those areas that were wriggling black with toadpoles. You could reach in and pick up handfuls of the fry if you wanted to. Steve used a dip net instead, keeping several in a five-gallon bucket to show to visitors at Lima’s Faurot Park Earth Day celebration.

The week before that, Steve came back to the house with a bucket of fairy shrimp in quarry water. I love to watch these tool in healthy circles, especially since their presence tells me that the wetlands are doing such fine work sponging sediment and impurities in the floodplain. The pools did such a great job that the bucket also contained a salamander larva with waving spaniel-ear-gills, and a predaceous diving beetle nymph.

My dad would have been so excited to see the contents of this bucket. His artist’s eye would note the analogous brown and gold patterns of the amphibian skins and the scarlet jaws of the young beetle. The latter is nicknamed “water tiger.” You don’t have to spend much time to understand why. Steve said he started up the path between the quarry and home with 10 toadpoles. At the door, there were seven left.

After lots of people oo-ed and ah-ed over the catch, we released them. Though many were surely washed away, we know that quite a few are still there. Grown frogs and toads sing through the nights. Great blue herons, raccoons, and ducks feast in the shallows while perched raptors wait for their one false move.