There were once crows in this place. They would caw across the hollow, scolding at outdoor cats and other predators. Their young would burr in the tallest, most remote hardwoods, then become silent if anyone or anything other than their parent came close.

A decade or so ago, so many raptors disappeared, victims of West Nile virus. The corvids–jays and crows in these parts–died, too. We saw only one dead during that time. It wasn’t inspected by anyone, but we assumed the bird’s death was due to the mosquito-spread plague.

Not much was said then in mainstream media about the effect of West Nile on anyone but humans. While the disease caused harm to people–I’m not denying that–the kestrels, and red-tail hawks that had previously perched from telephone pole to fence post were missing for years. We are only just beginning to see them again.

But the crows never did come back. Last spring, we heard two calling in Coburn’s Bottom, the area of the floodplain north of the old quarry. We were so excited, calling everyone we knew and fairly shouting, “The crows are back!” whether the listener was interested or not. Unfortunately, the pair didn’t stay.

We began to suspect that there is more to the absence of crows hereabouts than West Nile taking its toll. As I said, the bluejays are back, as are the hawks and even bald eagles. But research and observation of crows has determined that crows tell each other stories. Before a flock of crows enter a new area, they send a sentinel in to scope things out. If the report is favorable, the rest will move forward. If something disasterous happens while they are there–for instance, if one or more are poisoned or shot–the crows leave at the first opportunity. And they don’t forget.

That said, there’s strong suspiscion that it was inhumane human behavior that left a big red mark along the Riley and Cranberry Run for crows. Sad, as these birds are thought to be one of the most intelligent creatures that share this planet with people. Crows aren’t a bellwether species, but they are brilliant, secretive, organized and to be allowed to share space with them is an honor.

We’ve had the pleasure of spending time with two crows. Blackie and Jo, however, are here only because they have physical and developmental issues that mean neither can be free to make that choice for themselves. 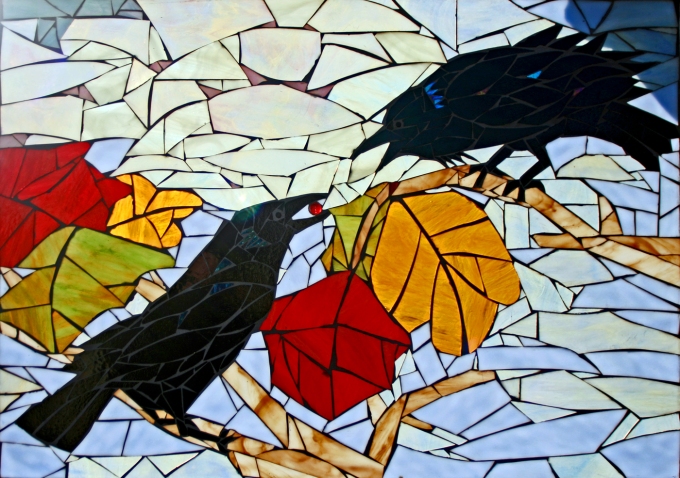 Stained glass artist Martha Erchenbrecher created the gorgeous work of art pictured above. The piece is stained glass mosaic or glass-on-glass mosaic. After trying for a few months, we were able to take a decent photo of it today with the winter afternoon sun shining through. We’ve hung it here for farm animal sanctuary visitors to see. One day, we hope to display it in a nature center here.

Maybe a scouting crow will see it and tell the others that they are welcome, anytime.

If you have ever had an affinity for writing, someone at sometime has said to you, “Write what you know.” It’s good advice. But what they don’t tell you is that sometimes what you know is what you love and, on occasion, you are so close to what you love that writing about it becomes more than simply difficult. Your love becomes a chasm that words can’t bridge. I’m going to type a word now that, to me, embodies this whole concept.

It’s a little word and they are a common bird, but even so, I have been enamoured and fascinated by crows for decades. By those who study animal intelligence, they are widely considered the most intelligent of birds. They aren’t simply tool users, but meta-tool users, designing tools by which they can get a tool to accomplish a task. They raise their young in multigenerational family groups, teach specific lessons to their young who, in turn, teach their own offspring these self-same lessons, communally avoid areas of known danger and may even use the same insecticide (formic acid deliberately obtained from the crushed bodies of ants) they use to rid themselves of lice and other pests to attain a state of inebriation.

That’s right. Crows may get loopy on ant juice.

And here’s the rub: I live with two of them. Literally live with them. In my house. And have done so for over a year. Their names are Blackie and Jo. Both came to us through Nature’s Nursery Center for Wildlife Rehabilitation and Conservation Education. Blackie first and then Jo. Over that time, a day hasn’t passed that one or the other of the two hasn’t done something noteworthy, engaged in behavior that wasn’t worthy of mention. Even so, getting the concept of them down, the enormity of their impact on my life, has proven overwhelmingly difficult. So, although I’ve tried, and there are literally dozens of drafts on this site that support my claim, I haven’t passed along a single anecdote.

To get to the meat of it, though, I have to seemingly stray away from the subject. Be patient.

Recently, we took in an additional fourteen hens. We acquired them locally from a pair of farmers who found themselves swimming in chickens. As I understand it, they were told by their supplier that their order of 150 chickens couldn’t be mailed, that they would have to drive to the hatchery and pick them up. Which they did, only to receive, a few days later, a shipment by mail of another 150. They were completely unprepared for so many birds, didn’t have the facility to house them all, although it appeared that they had tried. When we picked up our fourteen, the most the farmers were willing to part with, there were easily 200 hens and several roosters housed in a building no more than ten foot by fourteen. The birds had pecked each other raw, stripping the feathers from one another until many were half-plucked. To make a long story short, two of the chickens we took in have died, the (hopefully) last of them either late last night or early this morning. And now we get back to the crows.

Of the two crows that live with us, Jo is my girl. We bonded immediately. She greets me each morning, and I, her. It’s a complex thing involving specific crooning vocalizations. We visit with each other and preen one another. And when I’m outside where she can see me, she caws loudly and sits on the windowsill, watching me as I go about whatever task is at hand. Today, the one she watched me perform was the disposal of the body of the chicken that had died sometime during the night. As I was coming back up to the house, in the window of the room where the crows stay, I saw a small blob of brown bobbing in the window. It was obvious that Jo was in the window waving something around, but it took me a moment to figure out what it was.

As I mentioned earlier, crows are highly intelligent and they need a variety of stimulations to keep themselves occupied. We give them puzzles to solve and simple objects that they find interesting. One of Jo’s favorite toys is one of those tiny little plastic ducks, and by little I mean just a couple of inches long and maybe an inch and a half high, that you find all over the place. I’m sure you’ve seen them: little plastic ducks dressed like firemen or doctors or executives or sports figures. At the very least, you get the picture. 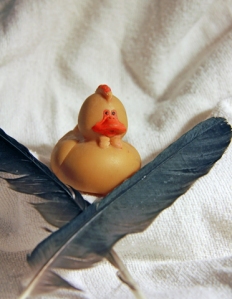 In this case, the little plastic duck looks like a little, brown, lifeless chicken.

And she was waving it in the window after watching me walk down the path behind our house with my own little, brown, lifeless chicken.

Think of it what you will. Maybe Jo was just showing off one of her favorite toys, trying to entice me back into the room for a little play time (which, by the way, she succeeded in doing). Maybe it was simply coincidence. It’s possible.

But I don’t think so.

This morning Steve was unable to locate Blackie the American Crow’s food dish. Through no fault of Blackie’s, certainly, as his roommate Jo is the crow with the mostest if she has any say.

I took fresh bowls of water in and tried my hand at locating the missing dish. I got down on my hands and knees and looked under the couch, table, cages and under newspaper before giving up. As I cleaned the old newspaper out from the cages, Jo perched on my back for a bit and jumped off when I turned to Blackie. Jo skittered around behind me. When I turned around to leave the room, there sat the missing dish on the floor in front of me.

Crows vocalize at ranges that we can’t always hear. I’m pretty sure that Jo’s subsonic chuckle followed me out the door. Typical.

Being outsmarted by Jo is a frequent occurrence. Not as common are these special events. Come one, come all to: 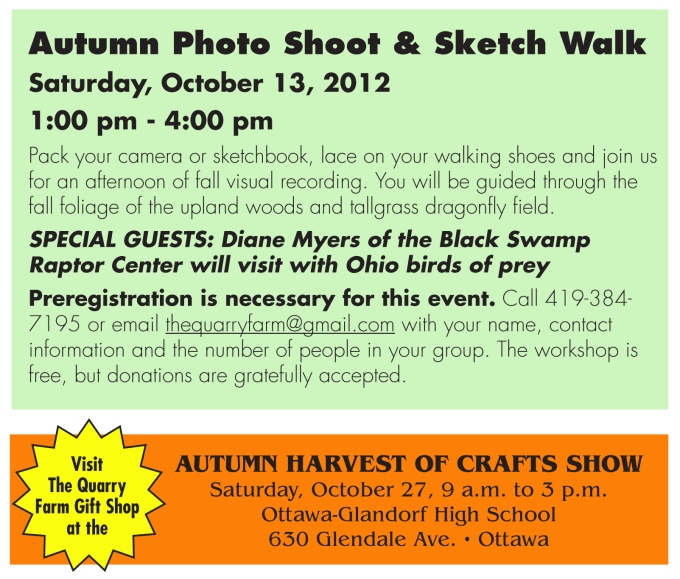